We made it though the crazy holiday!  I didn't have to do anything for costumes this year, we all just found something that would work.

James couldn't dress up for school.  And I wasn't around tonight-I was dressed up like a cancer patient to have my CT scan and brain MRI done. 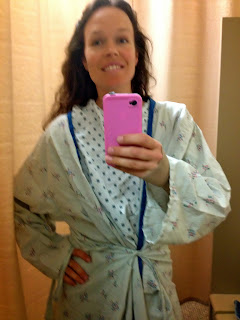 Doesn't get much scarier than that!  Results tomorrow afternoon.

I haven't learned much from the Seattle team this week.  They told me I would be starting either the first week of November (the one after Halloween), or the last week of November.  I'm guessing those dates are due to Dr. availability.  As we haven't gotten an answer from the insurance company yet (it is pending a Dr. review), it would most likely be the end of November.

Of course, that is if I decide to go on with the trial.

This trial would be a great opportunity.  I don't know if I will ever qualify again, so this might be the time to do it.  It has a response rate of around 50%.  I have read that 25% will see all their tumors disappear.  It is a rough treatment, and I'm trying not to let that factor into the equation.  Being sick is not a negative for me.  The sicker the better.  I have developed a strange craving for nausea and fevers.  I associate those feelings with shrinking tumors, and I miss them so very much (but wait till they are actually happening, then I'm sure to change my story).  This trial is one of the most advanced and individual ways of treating cancer.  It uses my own tumor attacking T-cells (which have proved pretty amazing in the past).  It is a one time treatment.  I thought I would only be in the hospital for 2 weeks, but it looks like 3-4 would be the more normal range.  However, none of this come-every-other-week nonsense.  Once I've finished the hospital stay in Seattle it is likely we can do most of the follow up in Utah at the Hunstman Center.

So why do I hesitate?  This is, after all, my dream trial because it is so extreme.

These are my thoughts.  The trial boasts 50% response rates.  When a person who has initially responded to IPI (this is the drug I did when it went to my brain) tries IPI again after progressing (they call it reinduction) they think there is a 60% chance you would respond again (although the numbers on a complete response are not as high as the trial).  And with my response, don't ya think my chances are higher than that?  And now, with the PD-1 in me, possibly those two could work together to do something even more drastic (trial combining the two drugs put the response rate at 60%).  So why in the world would I just not do IPI again?

The only problem with doing IPI again is risking the side-effects.  And actually, I am not as worried about the colitis, as not being able to qualify for things down the line because of it (remember the only reason I got onto the PD-1 trial is because they were studying if people like me with major toxicities (side effects) to IPI would have any side effects to the PD-1).  The biggest thing at stake is not being able to get onto the TIL trial in Seattle after doing IPI (even though they will freeze my cells for treatment down the road).  If I had colitis again they would require a normal colonoscopy (which mine after IPI was not normal, even on steroids).

So why don't I just do the trial first?  There are two drawbacks (maybe three if the insurance isn't on board, although I am not factoring money into the equation as per Josh).   I am worried about killing off my immune system, because it has worked so well in the past (the first part of the trial is lymphodepletion where they kill off your immune system in something similar to being prepared for a bone marrow transplant).  I realize it has not worked completely well, and I still have melanoma so the immune system hasn't figured it out completely, but still.  I can shrink tumors in days.  Days!!  Do I just need a dose of IPI every year to keep me stable??  If the TIL trial didn't work, would the new immune system work as effectivley when we did IPI again?  This is a question my doctor can't really answer (there have been so few people who have done this, there are a lot of unknowns).  They just don't have data.

The other concern I have is the long term effects from the TIL trial.  There doesn't seem to be anything major, and after communicating with some of the responders of this trial, they do not complain at all (when something obliterates your disease how can you have anything bad to say about it?).  But their white counts remain low years later, and some have complained of mild fatigue (Valerie are you reading?  What say you?).  Also, then if your counts are low you would have a hard time getting onto trials (trials are a melanoma stage IV patient's hope).  Yes, these are not big prices to pay, but what if I didn't have to pay them?  What if IPI would do what it did once and keep me pretty stable for another year?

I REALLY hate permanent damage.  This lymphedema in my arm is enough to remind of that.  I went into the therapist with it 10% bigger than my other arm.  After a week  and a half of therapy, and wrapping, and massages, and and the big pain the daily compression is, we got it down to 4%.  I should be thrilled, but it will take daily care and lots of caution to keep it down.  And it spread to my fingers last week, which just seems cruel.  I use those for everything!  Why my right arm?  Wasn't my leg enough?

I wish my decision was easy.  This is confusing, right?  I am trying really hard not to take into account money, my love of extreme discomfort, the luxury of being treated at home, and even the long term consequences (as they aren't that bad).  I simply want to do what would have the best chance at working.  And no one knows what it is.

I am waiting for something to feel right.  And I suppose after the insurance company has made it's decision, and we scan and see what the cancer is doing, that feeling will come.  Either way I have some pretty exciting options.  I am so ready to fight again.  Too much down time.  Things are way too easy.  October is the best month of all to be a stay at home mom, and I have enjoyed every minute of cancer distraction it has offered me.

The cells have grown enough.

I should have jumped for joy when they told me.  But I knew they would grow (these are my amazing T cells we are talking about).  And I knew when they confirmed this that I would be an anxious mess.

Because now I have a decision to make.  I am torn between what I think are my best two options:  Ipi here in Utah (the drug I did last June with amazing results and horrible side effects), or the TIL trial in Seattle.  Luckily, I don't have to decide just yet.  The Seattle doctor is trying to work with my insurance company to get the hospital stay approved (good luck with that!).  This will give me some time to continue collecting information and maybe to find some peace.

This is going to be a very hard decision to make.  It makes my heart race just thinking about it.  I will try and write up the dilemma here in a bit.

I know I am very fortunate to have options.  And honestly, they are both really good options.  But which is best?....
Posted by Alisa at 9:44 PM 10 comments:

Three weeks at home!!  I think that's a first since May.  I have not wanted to go anywhere.  Not even the grocery store.

And I feel great.  The fatigue I had from the PD-1 seems to have disappeared.  Tomorrow I have an appointment with the lympedema clinic to get a compression sleeve for my arm and hand so I can start exercising again (impossible lately with the large tumor, and then with the swelling once the tumor was gone).

For a couple of weeks things have felt quite normal.  Making jam, volunteering at the school, organizing my house, soccer games, piano practice, church, friends, family dinners.  Normal is wonderful.  This break has been very good for my spirits.

Next week we should have a better idea if this Seattle trial will be an option.  Even if it is, we will need to decide if that is the next step or if we want them to just freeze those cells for future use.  I suppose we will be scanning soon to see what's happening.  I don't have any more palpable tumors, so I can't really predict how that will go.  I don't have any pain, so it can't be that bad.

Thank you all for your kindness and encouragement.  I'm starting to believe the best way to learn these two virtues is to be the recipient of them.  I should be an expert by now.
Posted by Alisa at 9:58 PM 14 comments: